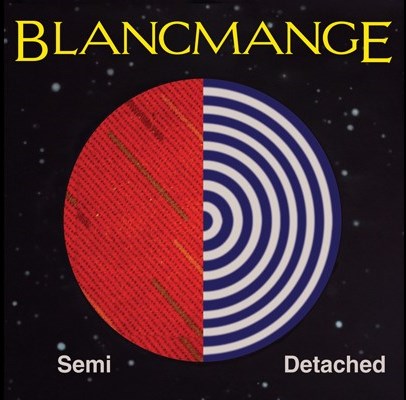 I've known Neil for many years. We recorded at a wonderful studio, high in the Brecon Beacons.
After a good walk each morning we'd start work on the tunes.
Neil's musical approach is electronic and groove based, with his often dark and oftentimes surreal lyrics over the top.
He likes me to lock in with the machinery. I enjoy the discipline of it; minimalist groove guitarring.
The couple of shows we're doing will be fun.

1 I Want Your Love (Extended Version)

9 I Want Your Love

This deluxe edition comes with a second CD of exclusive and extended mixes. A limited number will be signed by Blancmange.

Where to get the Album

Blancmange bring their bitter-sweet electronic songs to Cherry Red Records with their new album, Semi Detached which will be available on four formats – CD, Ltd Edition Deluxe Double CD, Vinyl LP and digital download. Due out on 23 March 2015, the tracks are shot through with lyrics inspired by Neil Arthur's instinct for surreal juxtapositions and abstract wordplay.

The eight minute opener 'The Fall' sets the tone with its imaginative mix of the London tube map, The Fall (the band), Heaven and Hell, suicide, ghostly (inner) reflection and rain-soaked romantic imagery. The synthesizer melody is lightly done but the narrative is one of broken hearts, tragedy... and The Fall: 'I went to see them many times,' says Arthur. 'I sent Mark E Smith our first EP and we exchanged a few letters, his being ones of humorous encouragement.'

'I Want More' is a cover of Can's only 'pop hit' from their 1976 album Flow Motion. The repetitive refrain of the title initially comes across as joyous, the soaring melody and rousing chorus of voices conveying a celebratory hedonism, but the song takes on a more foreboding edge against the backdrop of 21st century excess and its darker implications: 'Don't care if I break the law/I want more and more and more . . . '

'Paddington', which is scheduled to be the first single off the album on 9 March 2015, celebrates London through a blur of evocative, fragmented images – a random memory recall of life in the city. Meanwhile, the coiled, moody electronica of 'It Didn't Take Long' with the ice-in-veins kiss-off of 'I'm not sorry I hurt you', is followed by the gleeful artificial power of the synthesizers on the instrumental, 'MKS Lover'.

'Like I Do' is gripped by a propulsive rhythm and staccato phrasing, mapping out a cross-roads moment in someone's life. Will they recognise it? Can they tell up from down; real from fake? 'Deep In The Mine' is at the core of the album. 'I imagined a cavernous and yet claustrophobic space with endless passages running off it,' says Arthur. The soul-mining lyric is delivered with a roughened-up, husky richness by the singer that reveals new depths to his voice.

The tart 'Acid' is what happens when wit turns to bitterness, while the playful 'Useless' is the most openly 'pop' song on the album – a whirling, giddy four minutes built around the sweet and pithy lyric, 'everybody loves you/useless as you are.'

The album, which is mixed by Adam Fuest, closes with one of the best – and darkest – songs Arthur has written so far, 'Bloody Hell Fire'. Featuring some wonderfully atmospheric guitars, his own playing is layered with that of David Rhodes (Kate Bush, Peter Gabriel), who adds inventive guitar to many of the tracks on the album. 'Bloody Hell Fire' conveys a sense of world-weary detachment ('I don't know if I exist') through another striking vocal by Neil Arthur. For all its bruised, existential self-pity, this track is sung with haunted passion and arguably creates a moment of raw beauty which has been rare so far in the nervy energy of Blancmange's catalogue.

Semi Detached is Blancmange's 5th album to date, but the first without the involvement of Stephen Luscombe, Neils long term collaborator. While retaining Blancmange's characteristic humour, with this new album Arthur has moved on from some of the old tics and mannerisms to create an edgy, pared down and deeply personal record, getting the balance absolutely right between grit and light, the domestic and the cosmic, despair and joy.

The new Blancmange album, Semi Detached has been receiving some great reviews in the UK press. Here's a selection:

'Semi Detached is a journey downwards, both through the earth and through a psyche. This is an album of subterranean spaces, dark caverns hollowed out beneath the surface... Its depths will have you thinking about it for days. There's just so much here.'

'Still catchy, still infectious but now all grown up. The journey will no doubt continue, but for the moment this could be their finest album to date.' 9/10

'Stephen Luscombe had bowed out, leaving singer Neil Arthur in sole charge. Thankfully, his are capable hands: still in strong voice, his spare, pop-savvy synth tracks are a fitting canvas for his absurdist narratives.' ***

'Blancmange have seldom been hipper.' ***

'You won't go far wrong with giving this latest collection a chance.' *** 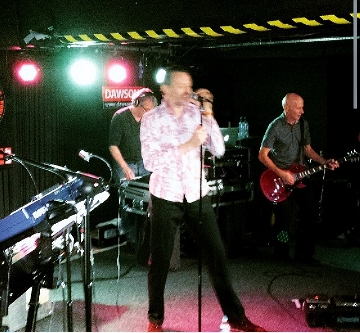 Blancmange's journey from '80s synth pop hitmakers to a reunited concern in the 2010s had been riddled with problems, most of them due to member Stephen Luscombe's abdominal aneurysm, which at this point has sent him home. As such, Semi Detached is essentially a Neil Arthur solo album with some help from frequent collaborator David Rhodes, but more than anything, it is a very, very dark Blancmange album when compared to all the others, and quite emotionally heavy as well. Opener "The Fall" is an eight-minute trudge with Arthur simmering throughout and primal screaming by the end, while "Useless" offers "Everybody love you, as useless as you are" with plenty of venom and little mirth. Hard to believe it is all coming from the band that chuckled through its heyday with hits like "Blind Vision" and "Living on the Ceiling," but Semi Detached is sincere in its distrust, distaste, and ire, and by the time "Bloody Hell Fire" underlines it all as a dour closer, the album winds up a worthy companion for bad days or chucking it all. Check "Paddington" for a hint of the old, bubbly magic, or "I Want More" for a quirky, unexpected cover of Krautrock legends Can.