For the KB 'Before The Dawn' shows, I'm using a number of instruments.

In no particular order:

The pedal board has been rebuilt by The GigRig. Its never sounded better.

There are a couple of Rivera distortion pedals, a Rivera chorus/vibrato, Roger Mayer Voodoo Vibe, Octavia and modded Wah, an Electric Mistress, a volume pedal, a Boss delay unit, and a Demeter compressor.

These then go into an old TC2290 stereo delay and into a pair of Rivera Royale combos.

I use Curt Mangan strings.

David went through the set list recently to share some of his memories about pedal board, positions, effects...
Always looks so easy what the guys up on stage are doing. But for a show like that everything is well planned and rehearsed. And everybody needs to be very attentive and focused to make it all work out.

After Peter and Tony finished the last song I had to make my way around one of the lights in its down position on the track. Where it was placed meant squeezing around between it and the girl’s riser.

I then had to remember to press a footswitch to activate the line for the acoustic and give the guitar a little scrape to make sure it was live.

Then across to my starting place for the show next to Tony.

Come Talk To Me

Not really being an acoustic player. I played both the acoustic tunes pretty much like I would on electric.

Over to my main position, to be able to sing.

Remember to switch off the acoustic footswitch. Change over to a regular tuned electric, which my tech Chris brings out to me.

The only change in sound during the song, is to add some drive in the heavy section when all the band is in.

I enjoyed singing the harmony in this.

Digging in the Dirt

The pedal board I use isn’t programmable, so I don’t have presets of banks of sounds. I prefer to switch different effects in and out as I wish.

Change guitar, to one with DADGAD tuning.

Delay preset on the TC2290 has to be changed. It’s a lovely sounding old delay unit.

This tune is quite modular and the guitar sound builds in stages through it, ending up loud and pokey for the riff over the out section.

I just have to be careful of the amp drive switches when I’m moving about. It’s easy to hit the wrong one. There was a particular problem with one switch which made the the rig cut out. We overcame this, by taping a bottle cap over the offending button. A design that John Giblin and Tech Chris came up with during Kate Bush rehearsals. I could kick it and not worry.

The Family And The Fishing Net

Another change in instrument. I think this was a regular tuned one. Chris, keeps everything in tune, and a spare instrument available should I break a string.

Another song which has some cool harmony lines for me to sing.

Another guitar change and delay change. Clean sound for the verses, loud for the middle section, add a flanger after that, then clean until the last five staccato notes.

This is fun for the backing vocals too.

Why don’t You Show Yourself

Regular tuning on a Gibson, with some tremolo. I start this tune from a visual tempo, coming in with a falsetto vocal. I have to hold the time as Peter sometimes starts pulling it back with his vocal in the verse.

Another guitar change, to something with a bit more cut. Amp distortion for the intro, clean for the verse, amp distortion and additional fuzz for the bridge.

More backing vocals to be done.

Dash offstage during the end piano and voice section, to put on a headset mic, in preparation for Sledge. Dash back on, as I have to start the song with Manu.

E flat tuning for this. These days a touch of grit from a distortion pedal to keep it sounding not too polite.

I keep the same guitar for this, whoopee! Clean sound, timed delay, vibrato here and there, tremolo when Peter sings in the bridge section.

Same E flat guitar, whoopdidoo! This is a back pickup song. It’s a bright distorted sound. It always feels as though this song might fall apart. The band take the tempo from my delay playing. Singing this is a challenge and a pleasure.

Change instrument. Regular tuning playing a groove to tick along with the drum loop.

Same guitar, bright punchy sound with a bit of distortion. The backing vocals quite hard work in this.

We Do What We’re Told

Probably my favourite song of the set. I use a guitar of Chris’s for this, with a whammy bar. No delay on this song; I generally use delays on nearly all of Peter’s material. Heavy distortion that breaks into feedback, which is delightfully unpredictable and needs taming. I sing high in the mid section to give P some help.

This is the Picture

I think this is an E flat tune with a capo on the second fret. Groove with delay and some distortion on the chorus. The girls do sterling work to keep the song afloat.

This is probably the song I’ve played most in my life. We used to do it every day in soundcheck on the Secret World tour.

The Tower That Ate People

Very noisy. I kick in whatever I can of to help!

A guitar that has built in feedback; all a bit out of control.

Restrained distortion. I come in after a high pitched voice that my old friend David Ferguson sang. He died a few years back. It adds another layer of poignancy for me during the performance.

On the first tab you can watch Chris explain about David's gear in a video.

Q: So...what does the Yellow one do?
A: It's a Facetious Limiter pedal, very similar to the 'You Don't Need To Know Anything About This' stomp box. I sometimes put a F-Off in there as an alternative.

Q: unusual pedal order....
A: It wiggles it's way left to right. I think The GigRig stuff normally runs the other way.

Q: I always thought your jazz master sounded cool in the old days !
A: Me too, but sadly it had to go a few years back.

Q: Sorry was just putting my anorak on, but what's under the top shelf? i can some see cheekiness peaking out and was wondering what they are please.
*cough anorak Cough* i'm assuming the pedal sticking out above the space echo is an AW-3
Electric Mistress
Octavia
A: All correct. There's a boss octaver too, along with all the dedicated power supplies.
Q: Cool thanks, I'll take the anorak off now
I've never seen it made mention of, but do you have a pickup preference?
A: Nearly always the front one, except when I use the back one.
Q: Funny. Thanks for indulging the anoraks out here. 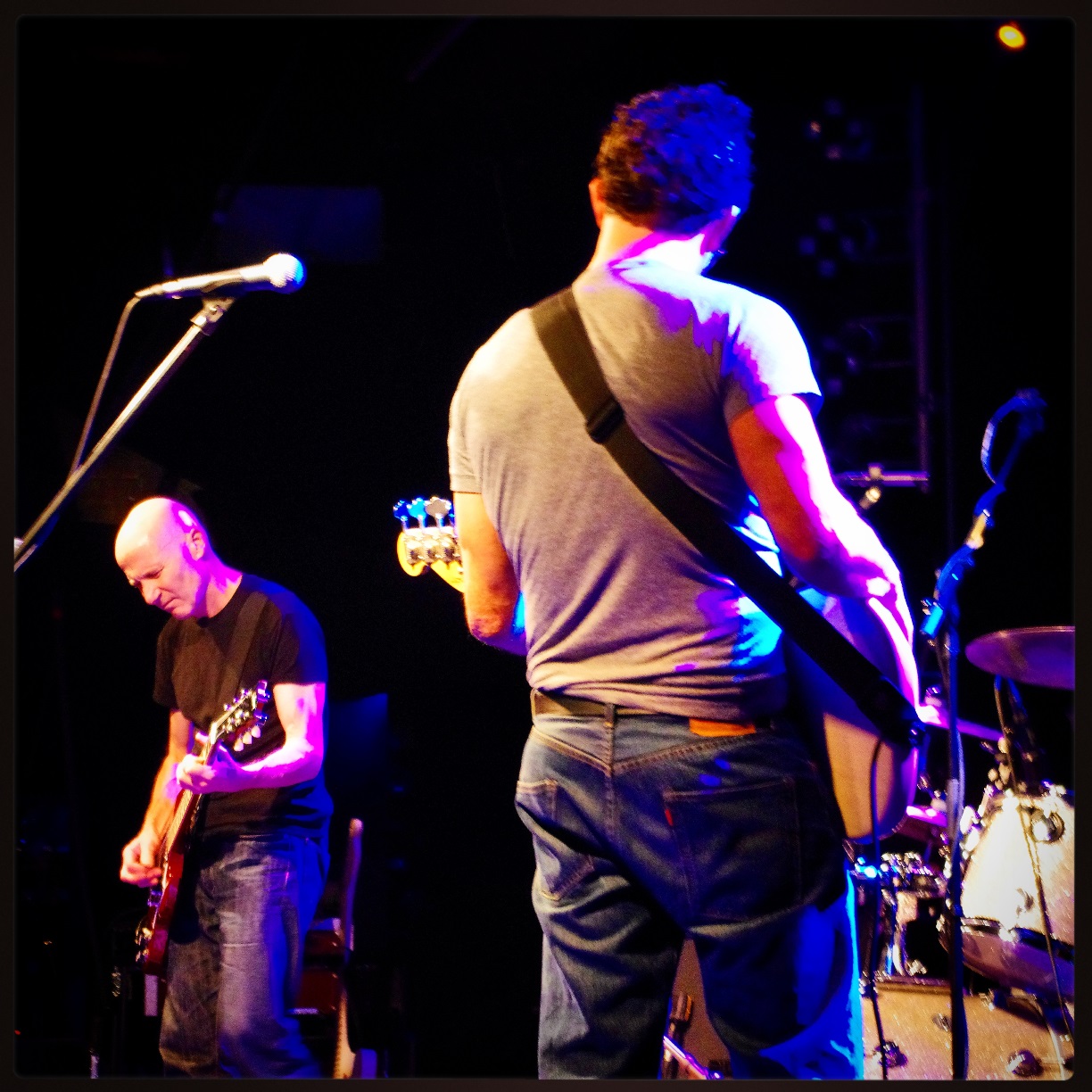 In between the Kate Bush 'Before the Dawn' shows and the fourth leg of Back to Front, David and his band did a short tour through Germany and Austria. Because of rehearsals for Kate's shows this tour had to be rescheduled from spring to autumn. Unfortunately Ged couldn't make it for the autumn dates. Rob Brian, stood in for Ged and he and his 'Betsy' did a great job.

In stark contrast to the big venues that David was preparing for and playing, the band was performing in cool, small venues like jazz clubs - take a look at the Tour Diary where you can find lots of photos. This makes for a quite different experience for sure! Being close to the audience and chatting with many fans after the shows made it different and very enjoyable.

The gallery at the bottom gives you an idea about the gear the band was using. And David explains about it. 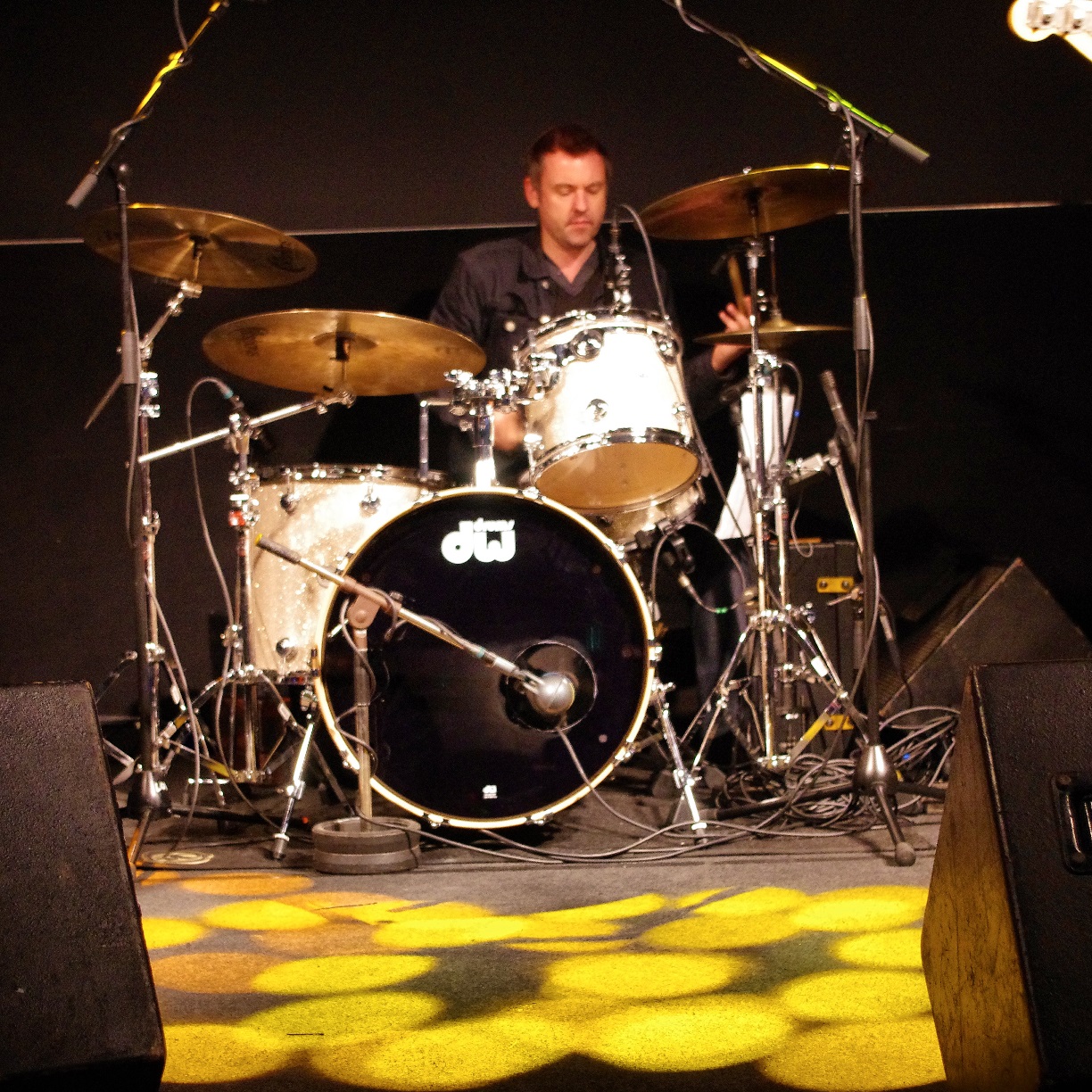 On my band shows, I use a different setup.
As I don't have my wonderful tech Chris with me I use a computer based system of effects. It is a workable compromise.
Obviously it doesn't sound as rich as the analogue pedal board and TC delay, but it functions well and doesn't need so much care and attention.

I carried three guitars on this trip, two Gibsons and the Tona Morsky Tele, from Croatia. Again, without Chris, and having a realtively small van any more than three would be more than I would want to look after. The small pedal board is the Guitar Rig one. I don't use any amp modellng just the effects and especially the programmed delays. So in a way I'm just trying to ape my bigger system on a manageable small tour scale. I used the big Rivera Knucklehead amps that I use on PG's shows. They're loud and and proud! I do enjoy feeling the air move behind me.
I also took my own small carpet, which I picked up in Egypt when I was there with PG over twenty years ago. The distance between my amp and my singing spot was measured by the carpet. Having it on the road meant I could play barefoot, as I did on the KB shows. It had become a habit. Rehearsals with Kate, were during the height of summer in a room that had no air conditioning. Kicking off sandals happened early on and stuck for months. I would have done the same on the PG shows, but the stage was full of trip hazards.